DOOH in Subway and LRT: Specs, Audiences and Inspiration

Subway environment digital screens offer the perfect opportunity to connect daily with a highly captive mass audience. Every day, commuters rely on screens to keep them informed and entertained while they wait for the train. Those commuters are made up of a diverse group of people— professionals to students to families and everyone in between —and range in age, although most are between the 18 and 44 years old. Some might be public transit users by conviction, whereas others are using it out of necessity. Either way, one thing is clear: they all have time to engage with your brand during their commute.

Why choose the Subway Station Environment?

For the high potential reach

In urban areas, public transit is often the preferred mode of transportation for commuters. It’s also a preferred environment for advertisers. After all, getting your message out to more than a million daily commuters is a pretty great start to reaching your target audience. Add multiple subway rides per day to the equation and the odds of having a successful, effective campaign get even better.

For the high dwell times

Having to wait for your train might be bad news for commuters, but it’s great news for advertisers. Savvy advertisers can make a 5-minute wait fly by with a little transit info and a lot of entertainment.

For the specific frequency of exposure

Many commuters use the subway several times—and at very specific times—throughout the week. Not only can you customize your messaging based on the time it’ll be viewed (think rush-hour mindset vs Saturday-night brain), but you can be assured that a consumer will see your messaging at various points during the week and weekend.

Every supplier has slightly different screen specifications and format support, but not to worry. Just upload a HD version of your creative in the right orientation and we’ll automatically generate creatives converted to the right format and resized to fit every supplier’s specs. Please note that in this environment, the ad creative will most likely share the screen with content such as weather information and news ticker.

The guidelines around speaking to an on-the-go audience are fairly elementary: keep it simple and as concise as possible. When that on-the-go audience is also quite large and diverse, your message also needs to be relevant for most of them. Here are some good examples of efficient practices in digital out-of-home in a transit environment. 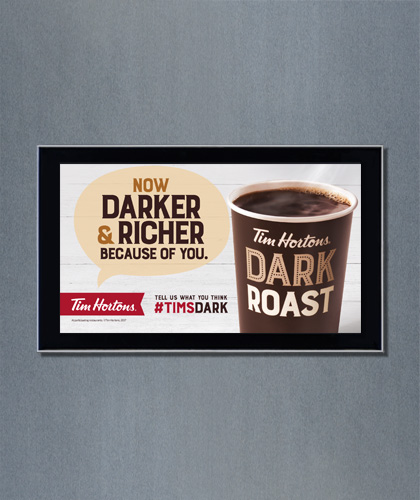 Advertising a product that’s consumed by the majority of the population is a great match for the transit environment. The fact that it’s done by a well-known brand is even better. The image is high contrast and contains a simple message. Combined strategically with dayparting, this creative is sure to influence the path to purchase of many users.

A fine example of efficiency and simplicity. Ripley’s Aquarium of Canada decided to use a mythical creature to make a splash. The video may seem a bit slow, but the image is high contrast and the copy intriguing enough to hold your attention until the big reveal. Because a captive audience is a beautiful—not to mention effective—thing. 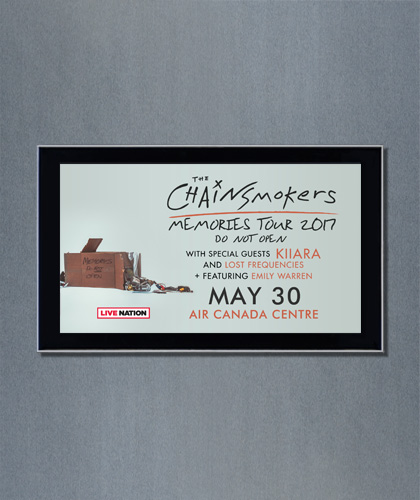 This creative illustrates one of the most important rules of advertising: always put the household name up front. The first thing you see here is the name of the headlining band. If that’s not enough to pull you in, Air Canada Centre made sure to clearly feature special guests in a different way and with a pop of colour.

Office towers are prime, premium settings in which to find an extremely precise and desirable audience: business professionals. So for advertisers, digital screens in office towers are the perfect platform for delivering their message alongside breaking news, local weather, and building content. Place-based corporate networks, often viewed as a symbol of the high-end commercial environment, engage the business crowd in those rare moments of their day when they’re forced to wait: lobbies and elevators.

Restaurants and bars are social and recreational environments which generally suggests that people who visit them want to be there, giving advertisers the opportunity to reach customers in a positive setting. The wide range of locations offered through Campsite already guarantees access to segmented audiences (such as business people, students, etc.) and since people associate their identity to the places where they want to be and be seen, targeting possibilities become even more precise.